Teamsters United has launched a Contract Unity Pledge to send UPS and the International Union a message that members are fed up with harassment and contract givebacks.

Teamster volunteers are asking UPSers to sign a Contract Unity Pledge that says, “I will stand with Teamster members at UPS to defeat harassment and contract givebacks and win the contract we deserve.” 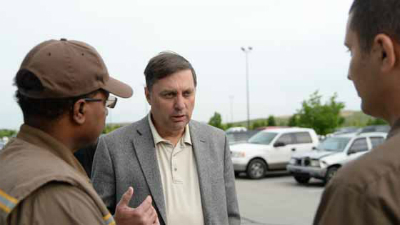 “The Contract Unity Pledge is the first step in our campaign to inform and unite UPS Teamsters and to tell UPS and the International Union that we won’t settle short this time,” said Teamsters United leader Fred Zuckerman.

“If you’re fed up with harassment and givebacks, I’m asking you to sign up Teamsters on this pledge so our message gets heard loud and clear,” Zuckerman said.

How to Get Involved

The Unity Pledge signatures are being collected in UPS parking lots by Teamsters like you. Can you help out in your local?

If you’re willing to pass out information and collect signatures, Teamsters United will ship you flyers and pledge cards.

One flyer focuses on package and feeder issues; the other focuses on part-timers and inside workers. We all need to stick together to win a good contract.

Materials are available to Teamster volunteers free of charge. Donations are accepted to help pay for the costs of this all-volunteer campaign.

UPS makes $5 billion a year. But in the last contract negotiations, the International Union gave the company givebacks. Harassment is at an all-time high.

The UPS contract cannot go into effect unless it’s approved by a majority vote of the members. That gives UPS Teamsters leverage to defeat a bad deal and win the contract improvements we need.

The Contract Unity Pledge is the first step in our campaign to win a good contract.

Click here to find out more about the Teamsters United for a Good UPS Contract campaign. 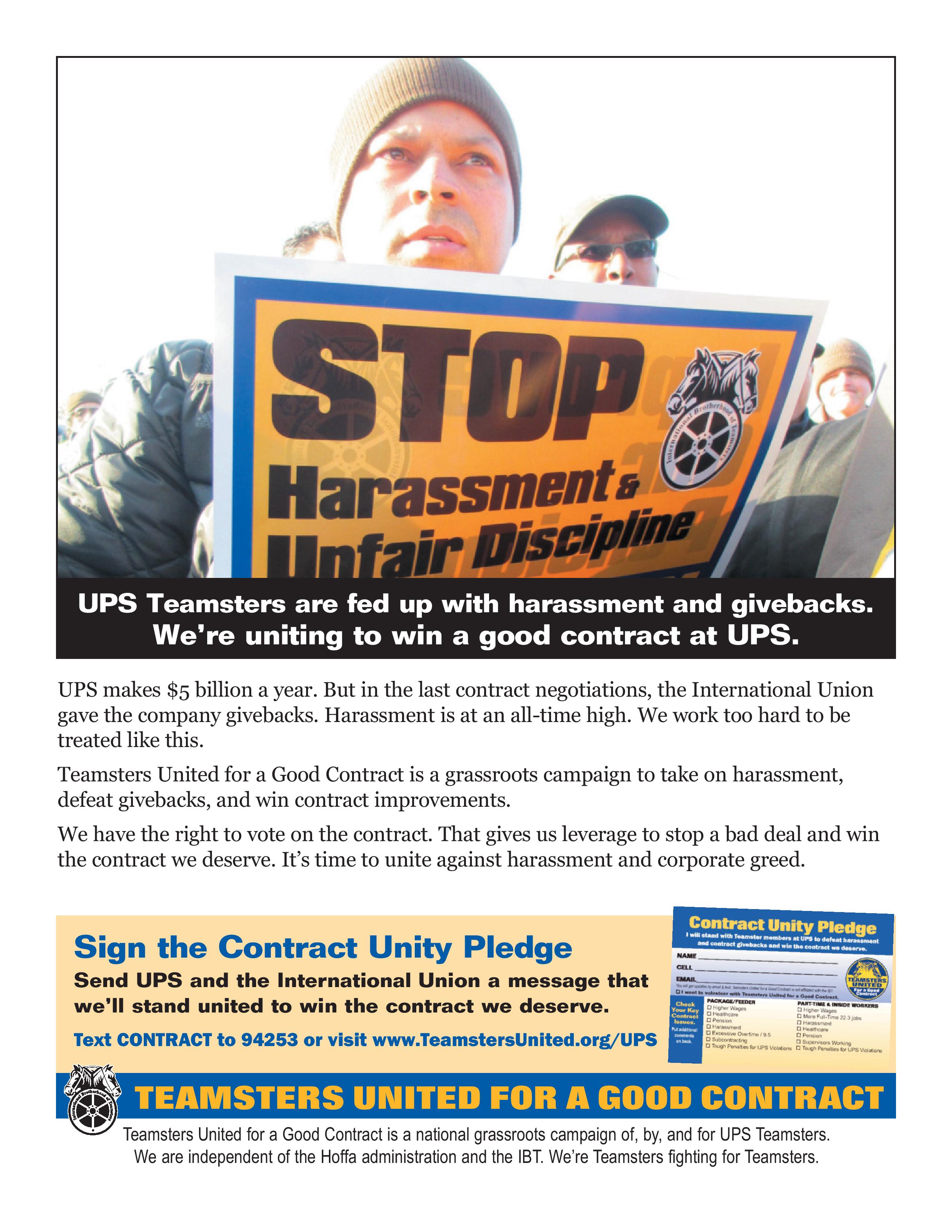 Download the inside worker leaflet in black and white 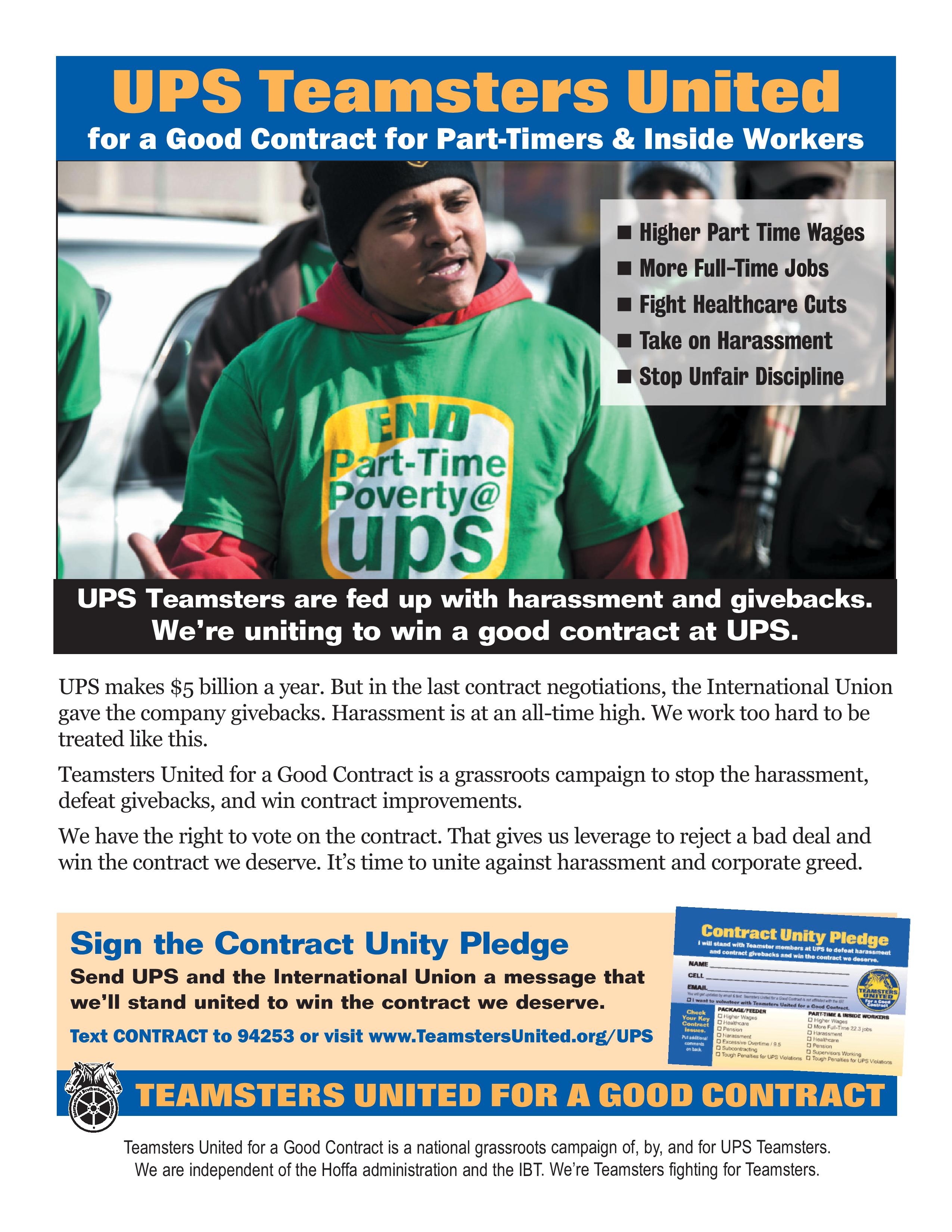 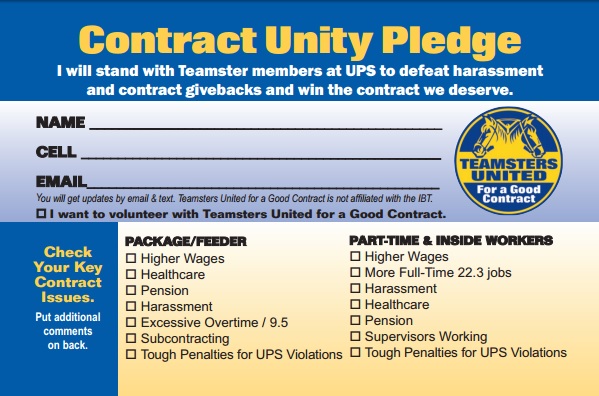