Hoffa’s Package Division has watered down key contract proposals to stop unfair discipline and prevent job elimination due to technology. 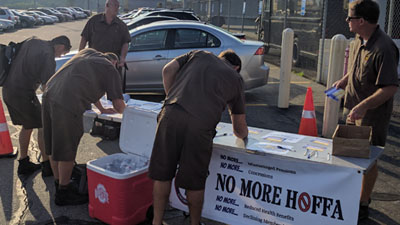 The International Union put forward strong language to strengthen Article 6 (Technological Change), including a ban on UPS using drones or driverless vehicles. This was the Hoffa administration's own proposal. Ken Hall has made a point of talking tough about the issue at national grievance panel meetings and even in Congress.

But Denis Taylor had the Negotiating Committee withdraw this proposal this week.

Taylor also withdrew a contract proposal that would prohibit management from disciplining employees solely based on technology.

Taylor withdrew another improvement in Article 6 that eliminated the loophole frequently exploited by management to discipline members on phony charges of “dishonesty.”

These changes in the union’s bargaining demands were not part of the back and forth of negotiations. They were made before the company had many counter proposals of any kind to Article 6.

The weakened Union Proposal for Article 6 still has some teeth. It would prohibit the company from discharging or suspending employees based solely on technology.

It also adds new language that makes it clear than “failure to follow proper procedures” does not constitute dishonesty for the purposes of discipline.

Everyone understands that negotiations involve give-and-take and that we won’t win everything.

But the Package Division should not be watering down proposals on signature issues like job security and unfair discipline right out of the gate without securing anything in return from the company.