First, he settled short on harassment. Now, Hoffa’s chief negotiator Denis Taylor has cut a weak deal with the company on excessive overtime.

Taylor claims to have won “significant changes” in Article 37 in bargaining this week. But for UPSers who are fed up with over-dispatch, the changes to 9.5 amount to be a big nothing burger. 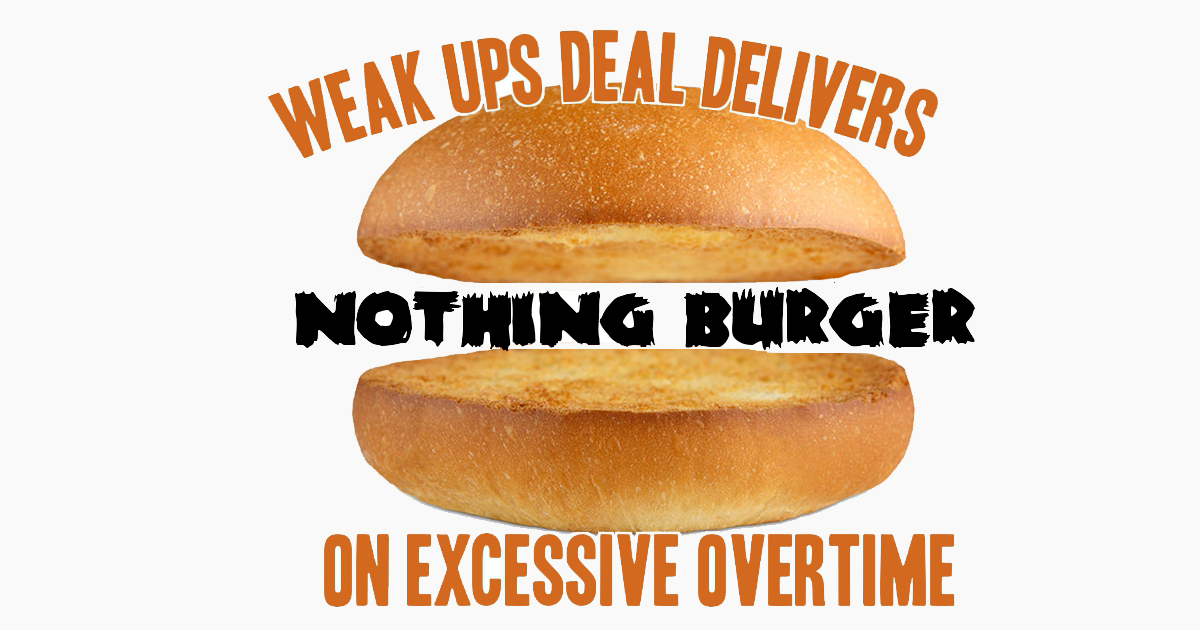 The 9.5 system is broken. The union put strong bargaining demands on the table. But Denis Taylor systematically watered them down and dropped them one by one from the tentative deal reached with UPS this week.

UPSers wanted all drivers to be eligible for 9.5.  Taylor’s deal excludes package drivers from 9.5 until they have four years of seniority. The loopholes that exclude cover drivers stay in effect, too.

UPSers proposed that extra pay for hours worked over 9.5 appear automatically in your paycheck, like overtime. Under Taylor’s deal, every 9.5 violation still has to be grieved. UPS can continue to stonewall 9.5 grievances and settle them for dimes on the dollar.

UPSers called for all drivers to automatically be opted-in to the 9.5 list, with an opt-out option for drivers who want the extra overtime. That change was scrapped, too.

Finally, UPSers pushed for contract rules that would force the company to adjust their dispatch. More than penalty pay, drivers want to go home after 9.5 hours and see their families. Taylor’s deal does nothing to address this.

There is a toothless provision that requires the District Labor Manager to meet with the Business Agent and the Center Manager if a driver’s 9.5 rights are violated four times in a year. Don’t hold your breath!

So, what is new about the proposed new Article 37?

Drivers no longer have to work more than 9.5 hours on three days in the week to get on the 9.5 list. Instead, the Union will give the company a list of the drivers who want to be on the 9.5 list.

There will be two five-month periods. The list has to be turned in to UPS ten days before the beginning of each period. But a driver can get on or get off the 9.5 list at any time.

That’s it. After telling UPS that 9.5 is the union’s priority issue, Denis Taylor settled for this big nothing burger.

What Can Be Done?

The tentative agreements that have been reached are not final until the entire contract is negotiated. Taylor should go back to the drawing board and fix the weak 9.5 language before the contract is put to a vote of the members.

The national contract cannot go into effect until it is approved by the members. The right to vote gives members the final say and the power to stop a weak contract.