The International Union and UPS have wrapped up their second week of contract negotiations. Teamster members need to be ready to fight. 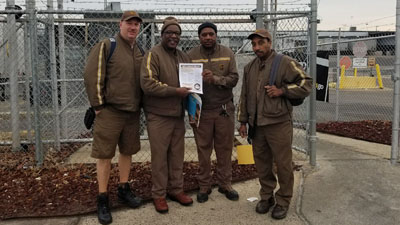 The Union put forward a package with many strong proposals. UPS has responded with demands for massive concessions.

UPS knows their givebacks will never be accepted by the membership. They are using them to probe the Hoffa leadership for weakness and distract members from our own contract goals.

On harassment, the Union proposal would create a grievance panel committee that would hear grievances on harassment and excessive overtime that are not settled at the local or area level.

The new committee proposed by the union would be similar to the national 9.5 Committee which has had mixed results at best.

The Committee would be empowered to impose financial penalties for every violation—from a minimum of a half day’s pay up to a week’s pay depending on the offense.

The Union has put forward strong proposals that would require the company to reduce the work day for all package drivers to below 9.5 hours per day with the exception of November and December. The penalty for violations would be triple time.

The Union has put forward strong proposals that would require the company to reduce the work day for all package drivers to below 9.5 hours per day with the exception of November and December. The penalty for violations would be triple time.
Drivers who want the hours could exempt themselves from the 9.5 cap.

UPS’s proposal would give drivers only ten days at the start of the year to opt-in to the 9.5 list. After that, drivers would have no 9.5 rights.

The International Union has not put forward any proposal to cap excessive overtime or ban six-day and 70-hour work schedules during peak. But Package Division Director Denis Taylor said a proposal will be given to the company soon.

To address the epidemic of supervisors stealing our work, the Union proposal increases the penalties for supervisors working violations and requires management to immediately inform the shop steward when a supervisor is performing union work or pay a triple time penalty.

Management’s counter-proposals would change the contract to make it harder for members to be paid for supervisors working grievances by requiring members to prove that they were available to perform the work done by the supervisor and impose this restriction in every supplement.

The International Union put forward strong language to strengthen Article 6 (Technological Change), including a ban on UPS using drones or driverless vehicles. This was the Hoffa administration's own proposal. Ken Hall has made a point of talking tough at national grievance panel meetings and even in Congress.

But Denis Taylor had the Negotiating Committee withdraw the proposal to ban UPS drones or driverless vehicles. Taylor also withdrew a contract proposal that would prohibit management from disciplining employees, solely based on technology. A proposal to eliminate the loophole the company uses to discipline members on phony charges of dishonesty was also withdrawn.

The revised Union Proposal for Article 6 still has some teeth. It would prohibit the company from discharging or suspending employees based solely on technology.

It also adds new language that makes it clear that “failure to follow proper procedures” does not constitute dishonesty for the purposes of discipline.

The Union and the Company also exchanged proposals on Surepost. The Union proposal would eliminate Surepost and require that work to be performed by Teamsters.

Management’s proposal would allow the company to expand its use of Surepost and give away more of our package delivery work to the post office.

The company has demanded other concessions that would gut our rights and working conditions.

One UPS proposal would allow the company to require all new employees to use their personal vehicles to deliver packages. The Package Division has already objected to any use of Personal Vehicle Drivers (PVDs).

Another company proposal would allow management to designate up to 20 percent of the routes in each center as a residential route. Drivers on residential routes would be paid at a lower rate.

The company also wants the right to implement Sunday delivery work with the option of using part-time drivers to deliver ground and be required to use their own vehicles.

“The company’s outrageous and insulting demands show they are not getting the message. Members are not taking givebacks again.” said Fred Zuckerman, the leader of Teamsters United who represents more than 10,000 UPS Teamsters in Louisville Local 89.

The company is using the old trick of demanding concessions to probe for weaknesses and get the Hoffa administration to water down or withdraw the union’s proposals.

The Hoffa administration needs to hold the line on our contract demands and send the company a message by mobilizing the members.

“UPS is playing the concessions card, but this is no game,” Zuckerman said. “UPS Teamsters are fighting for improvements and we are not settling short.”