UPS Teamsters work under nearly 40 supplements and local riders to the National Master contract—with different language on some key issues from discipline to paid time off.

For the first time, rank-and-file UPSers have created a tool so members can compare language and rights across the different supplements and riders.

Comparing supplements is not about finding the “winner.”

Every supplement has its strengths and weaknesses and can benefit from bargaining for the strongest language in other supplements.

Every supplement has weak language and loopholes that can be addressed in our upcoming contract negotiations. 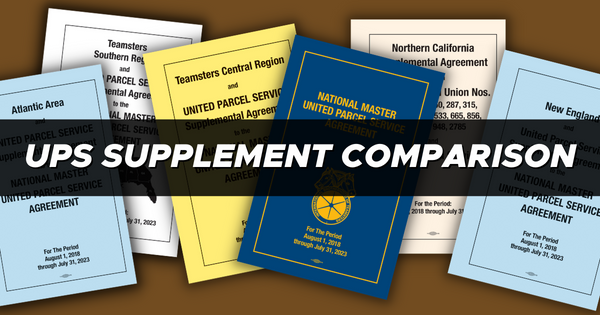 The contract comparison covers most of the largest supplements and riders, but not every single one.

Some of the issues covered include: Vacation, Cardinal Offenses, Paid Time Off, Seniority Acquisition, 8-Hour Requests, Lunch and Breaks, 6th and 7th Punch Pay and Protections.

The online comparison tool lets you click on an issue and see a quick report on each covered supplement.

For example, most supplements give one week of vacation during the first year of seniority and two weeks after the second year.

But when do members get their third week of vacation? That ranges widely from 10 years (Southern Region), 9 years (Atlantic Area), 8 years, (Central Region), 7 years (Joint Council 28), down to 3 years for the Northern California Supplement.

Another example from the contract comparison is cardinal offenses, infractions for which members can be immediately terminated. Many of these are shared across the supplements like drinking on the job, unauthorized passengers in the vehicle, and dishonesty.

But some supplements have “catch-all” phrases like “other cardinal offenses” (Central Region), or “offenses of equal seriousness” (Central Pennsylvania). This vague language can open the door to abuse by management.

Updates and additional information will be added to the comparison based on member comments. Send back your questions, comments, and feedback to UPS Teamsters United at [email protected]

Get Prepared for Negotiations

This fall, local unions will be holding proposal meetings to get contract ideas from members on both national and supplemental issues.

Now’s the time to do your homework.

Use the Supplement Comparison to see how different supplements deal with the issues that matter to you.

Share the information with other Teamsters and talk together about what you want to fight for in the contract. We have a better chance of winning improvements when we identify priority issues and unite around them.

UPS Teamsters United is a campaign of Teamsters for a Democratic Union (TDU). Contact us to get involved and to get in touch with concerned members who are covered by your supplement.

Together, we can win the UPS contract we deserve.

The Comparison covers most of the largest supplements and riders, but not every single one. New sections and updates will be added to the comparison based on member comments.

Click on a topic, like "Helper Pay" or "Seniority," to be brought to the supplemental language. Click on your supplement to expand the row and view your language.

Send back your questions, comments, and feedback to UPS Teamsters United at [email protected].

Combined for optional Week/Can Be Vacation, Pay or Individual Days

In cases not involving the theft of money or merchandise an employee will remain on the job until a hearing is held with the business agent. Such hearing will take place within seventy-two (72)
hours.