The International Union has issued a Call to Action to UPS Teamsters beginning the week of August 1-5 to kick off the UPS contract campaign.

Find out more about how you can get involved on a UPS Teamsters United Zoom Event this Sunday, July 17 at noon EDT / 11am CDT / 10am MDT / 9am PDT. 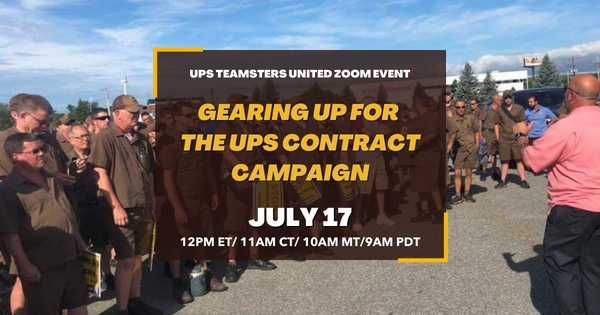 Meet with UPS activists from around the country and find out how you can get involved in organizing to win the contract we deserve.

August 4th marks the 25th anniversary of the 1997 UPS strike. We can make history at UPS with another victory in 2023. Find out how you can be a part of it.

Registration is closed. A recording will be made available after the call.

This zoom event is being organized by UPS Teamsters United, a grassroots network of Teamster members. We are independent of the IBT and its affiliates. We are organizing this call to build support for the International Union's call to action and national contract campaign.