The Teamster Contract Campaign at UPS will kick off with a series of workplace action nationwide, starting as soon as August 1. The International Union has released a great toolkit of materials for members and local unions to use at rallies, parking lot meetings, and leafleting actions at UPS locations. 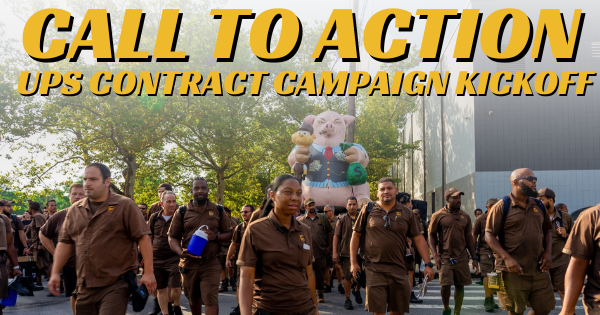 The toolkit includes a leaflet focused on key contract issues to pass out at UPS gates.

Every local union has also been mailed palm cards with a QR code so members can download a new Teamster app for UPS workers.

The app will allow UPSers to get regular updates and includes features like searchable Teamster contracts, grievance tips, a steward’s guide, a strike savings calculator, and more.

Local unions are scheduling leafleting, parking lot meetings and rallies starting as soon as August 1 and continuing throughout the month.

Talk with your shop steward or Business Agent to find out what the plans are in your local and volunteer to help kick off the contract campaign where you work.

For more information, check out www.upsteamstersunited.org or call Teamsters for a Democratic Union at (313) 842-2600.